As an ensemble director, musician and scholar, Vladimir Ivanoff endeavors to mediate betweenthe theory and practice of music.

He illuminates the connecting threads between Orient and Occident,
Judaism, Christianity and Islam, past cultures and present time.

By doing this, he is not interested in creating hip cross-cultural
mishmash projects. Instead, he is driven to create a deeper public
consciousness for cultural distinctions, for clichés, for the patterns,
which determine our perception of the Other and the Foreign.

Ivanoff was born in Bulgaria, from where he emigrated to Germany as a young boy with his mother. Originally planning to become a film director, he decided to study musicology, art history and theater studies at the Ludwig-Maximilians-Universität in Munich. With a prize-winning thesis on the earliest lute manuscript, he received his doctorate in musicology. Simultaneously, he studied lute and historical performance practice at the Schola Cantorum Basiliensis and the Musikhochschule, Karlsruhe.

A grant from the Deutsche Forschungsgemeinschaft enabled him to proceed with a post-doctoral research project
on the musical exchanges between Orient and Occident in Venice. He also started lecturing at various European and American universities and conservatories. Ivanoff has published several books, contributes regularly to music journals and encyclopedias, lectures at international conferences and directs workshops worldwide. From 2011 to 2014 he was artistic director of the festival «Tonfolgen» in Bonn, Germany.

In 1988 Ivanoff founded Ensemble Sarband. With this group he has since been performing in concerts, scenic projects, radio, TV and CD productions all over Europe, Asia and the U.S. As a CD producer, composer and arranger he works with numerous artists from widely diverse backgrounds, amongst them: Mystère des Voix Bulgares, Concerto Köln, The King's Singers, Berlin Philharmonic Orchestra, RIAS Chamber Choir, and Sidi Larbi Cherkaoui.

Ivanoff was nominated for two Grammy Awards in 1994. With Sarband, he received two Echo-Klassik CD Awards in 2003 and 2006. The Region of Apulia awarded him with the «Premio Mousiké» for the diffusion of Early Music in the Mediterranean in 2007. The following year he received the German World Music Award; 2017 the Baltic Grammy "Zelta Mikrofons".

«Sarband's director Vladimir Ivanoff: With his musicians from different cultures, he strengthens our consciousness for the unity in diversity.» Katharina Hogrefe, Kronenzeitung (Austria), 09.07.17

«… the unique orchestra, which enchants through it's exotic beauty of sound, is held together by the archaic percussion of ensemble director Vladimir Ivanoff, who also provided magnificent arrangements bestowing a lot of space for improvisation to the soloists … » Dr. Lothar Jahn, Waldeckische Landeszeitung, 28.05.16

«In this church with its widely radiating golden dome, also the cultural horizon of Christian confession is transcended,
such as the Bulgarian master of transcultural encounters, Vladimir Ivanoff, has chosen as the mission of his life.
His task was never the exotic extravaganza for the sophisticated voyeur, but always the subtle fusion and juxtaposition
of styles, the dissolution of tradition, the magical time leap.» Christoph Schlüren, Gramola (Austria), 01.11.14

«In a very impressive way, this CD with the "Miserere" by Gregorio Allegri, proves how contemporary Early Music can be. Vladimir Ivanoff, a musician highly esteemed for his connections between Orient and Occident, also director of
Ensemble Sarband, arranged this composition for three choirs and saxophone. Combined with the recording location -
the unique Viennese church by Otto Wagner (1841-1918), and with the technically exquisite recording -
this results in a vanquishing, downright mystical musical experience.» Rainer Aschemaier, The Listener (Germany), 28.10.14

«For decades, the Bavarian Bulgarian Vladimir Ivanoff,with his Ensemble Sarband, has been amongst the leading mediators between Oriental and Western Classical music.» Jens Voskamp, NN, 05.08.14

«With his Ensemble Sarband, Vladimir Ivanoff has deeply immersed himself into the cultures of Orient and Occident,
bringing to light the most amazing connections.» Babette Kaiserkern, Potsdamer Neueste Nachrichten (Germany), 26.11.12

«Vladimir Ivanoff is the musical director, equally captivating as a percussionist as well as responsible for the choice
of poetry and music.» Noreen Hirschfeld, Göttinger Tageblatt (Germany), 23.09.10

«It is part of the artistry of musical directorVladimir Ivanoff to leave it up to the audience to choose whether they want
to read the events on stage in a religious or an artistic way. One is grateful for this. Genuine art subsists on the freedom of its interpreters.» Kersten Knipp, NDR Kultur (Germany), 18.09.10

«Ivanoff, percussionist and musical director of Sarband, set up the programme wisely, avoiding the major mistake
that could have been made: the pastiche. The result, subtly balanced, convinces and captivates.» Javier Losilla, El Periodico de Aragon (Spain), 09.08.10

«Before Jordi Savall became famous with it,Vladimir Ivanoff was already committedto the vision that the separation
between Orient and Occident did not make sense in Early Music … What makes Sarband so unique is Ivanoff's persistent effort to make Oriental music accessible to Western listeners.» Stefan Grondelaers, De Standaard (Belgium), 25.05.10

«… Ivanoff effortlessly connected on the concert stage what is utopian on the global stage: that nothing stands between Christians and Jews and Muslims. Except for "and".» Michael Tschida, Kronen Zeitung Graz (Austria), 04.06.06

«There, at the borders of Europe, where our eurocentric sciences and arts stop, Vladimir Ivanoff just takes off …»
Thomas Muttray-Kraus, Oberbayerisches Volksblatt (Germany), 03.02.01

«Nothing compares to Ivanoff's art of playing the frame drum. … Ivanoff crosses borders and thus finds a new music which transfers our dreams about the Orient into a soundscape.» Franzpeter Messmer, Fono Forum (Germany) 11/00 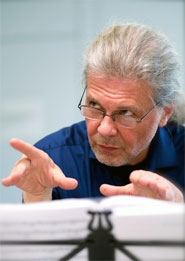 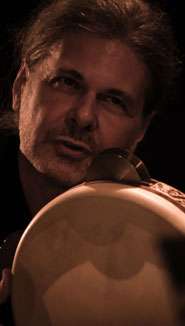