Sheherazade: A Great Love
Vladimir Ivanoff and Sarband tell the story of a yearning approach
and discover Europe in Turkey and the Orient in Paris

It was a great love: Sultan Abdülaziz, one of the last rulers of the Ottoman Empire,  enthusiastically composed elegant
European-style music.  At the same time, western artists mostly saw in the Ottoman Empire the mysterious Orient,
an imaginary landscape,  full of dark desires, surpassing each other with ever new exotisms.

Ottoman Turkey understood itself as a political and cultural part of the European alliance,  but was only tolerated by the
western powers as the «sick man of Europe». At the same time, in European culture, the geographical Orient increasingly
became an undetermined place,  an «Orient Imaginaire», resource for unstilled longing, dark desires and debauched fantasies
which were forbidden in Europe.

Therefore the Orient could not become a part of Europe but had to remain an alien culture in order  to further fire the collective
European imagination. The great love was unrequited, and Sheherazade still has to knock in vain on the door of Europe.

«Closeness and distance were the two poles of this enchanting evening … With her colorfully shaded soprano,
Dilek Geçer lent great intesity to Callisto Guatelli Pasha's song settings. In the second half, the audience was simply
enthralled by this erotically charged singing. Celaleddin Biçer on ney and kanun, Ahmed Kadri Rizeli (kemençe) and Uğur Işık (violoncello) created magical moments in their joint improvisations.»
fg, Main Post, 30.12.2008 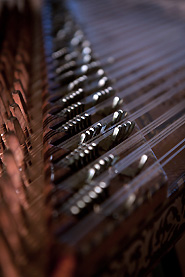